By the way, there have been many such couples in Bollywood who come from different religions. Some took nikah and rondas to maintain the respect of both religions, while others forgot themselves in love and adopted their lover’s religion.

Farhan and Shibani made their wedding an intimate vow ceremony

In fact, it was previously reported in some news that the two were to be married according to Marathi customs. However, Farhan and Shibani neither married nor took seven rounds. He considered love above all these things.

They both respect each other’s spirit and religion and thus took a middle path. Both have made a very simple and private marriage. In which only 50 of his relatives attended.

Both were married at the Akhtar family farm in Khandala. The couple did not have a Hindu wedding or a nikah. The couple had decided to do something different. That is why Shibani and Farhan decided to support each other for seven lifetimes by performing Vow and Ring Ceremony. Some people found this method of marriage incredible and others did not digest it.

People who attended the wedding were asked to wear simple clothes in pastel shades. Mehndi and Haldi rituals began in a simple way from February 17. Shibani and Farhan did not want any noise in their marriage. 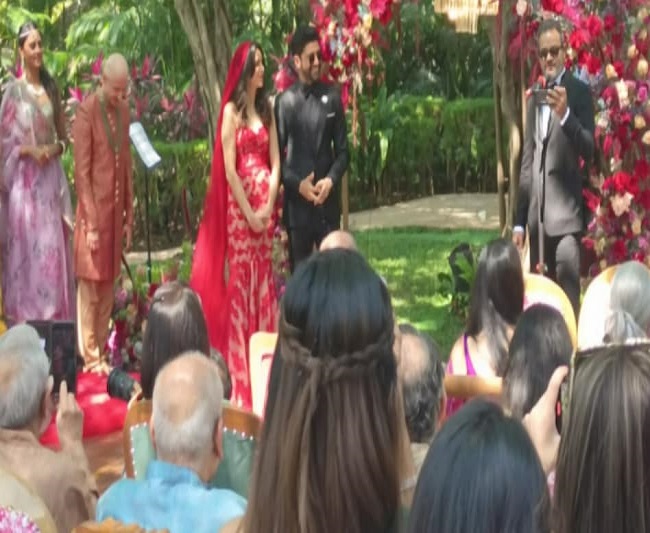 Their marriage took place at the Akhtar family’s country house in Khandala.

Both have considered love above any religious tradition.

Farhan is Muslim and Shibani is Hindu. Both did not want anyone to be forced to follow the religious traditions of the other. That is why both made their wedding an intimate vow ceremony. For this, he had written the vows for him, which he read in front of all the wedding guests. Now both will make a judicial marriage on February 21.

Will the contractors of religion be able to digest this marriage?

Those who are looking according to what custom Farhan and Shibani get married. They will be able to digest this type of marriage in which both neither accept, accept, accept, nor do they go around 7 times.

They both also kept their outfits very simple. While Farhan looked gorgeous in a suit boots look, Shibani opted for a red and beige dress without wearing a heavy lehenga, in which she looked stunning. Shibani completed her wedding look with a gorgeous red veil.

In reality, Farhan and Shibani have known each other for 4 years before marriage. They have lived together and understand each other very well. Therefore, he decided to adopt the third method, leaving behind both Hindu and Muslim customs.

Otherwise, it has been happening in the society that the girl changes her religion after marriage, she changes her last name. However, none of this is going to happen in this marriage. Here love has truly transcended religion. Well, what is the meaning of this marriage in your opinion? Is this unique and simple way to get married for both right?

Changing the name of the movie to ‘Dhaakad’ is not going to keep ‘Dhaak’ at the box office!

Bollywood’s solidarity to compete with South Cinema is on display!

Changing the name of the movie to ‘Dhaakad’ is not going to keep ‘Dhaak’ at the box office!

Bollywood’s solidarity to compete with South Cinema is on display!

Emraan's look leaked from Tiger 3 sets claims, is the actor really a villain in front of Salman?

Controversy about one and praise for the other.

Chhorii Movie Review: Neither Scare or Laugh, But ‘Chori’ Makes Her Think

Vidyut Jamwal’s wedding will be unique like a proposal, skydiving with 100 guests!

Why did Harnaaz Sandhu make the sound of a cat on the Miss Universe stage? Lara Dutta replied

Which asana should be done during corona period? Shilpa Shetty shared the video